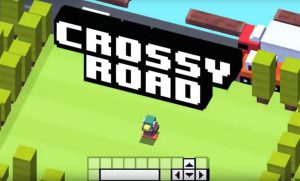 Crossy Road is the 8-bit endless arcade hopper with colorful graphics. The app was designed in 2014 by Australian company Hipster Whale. Initially, the game was made for iOS and Android devices. After its huge success, it was ported to web browsers and even Windows Phone.

The name and concept of the game have a direct reference to the old joke “Why did the chicken cross the road?” This actually explains the player’s principal target. The objective is to move a helpless chicken through all obstacles (cars, trees, and others) to the other side of the road.

As the player progresses in the game, different rewards can be found. For instance, coins, an in-game currency, are used to buy hundreds of various characters. Spend one hundred coins to get a random hero from a lottery. Besides, your prize is doubled after watching ads.

It’s actually worth buying new characters, as it changes the environment around making the player return to the game. There is no way the player completes the level, as the road has no end.

The way controls work depend on what platform the player uses. The original mobile version works with screen swipes to move horizontally or backwards. In order to move forward, the player just taps the screen.

When playing in a web browser, the chicken is controlled with arrow keys. It’s more convenient, as it allows the player to react faster. This helps a lot when the game tempo increases.

Such simple controls help master the game quickly. Then, the player can spend the rest of the time getting different skins and enjoying the process of saving the chicken. 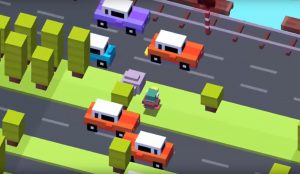 As the game concept is easy and straightforward, there aren’t too many tactics to follow. However, here are some of them to help the player reach the best score:

Practice more to see how the game mechanic works, apply new strategies, and try new ways of saving the chicken.