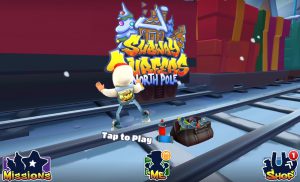 Subway Surfers is a 3D endless runner game developed by two Danish companies Kiloo & SYBO. It’s one of the oldest apps of that kind, as it was launched back in 2012. The product has amazing vivid graphics along with unique features. All that attracts millions of players until nowadays.

The primary goal is to run as far as possible. There is always the inspector and his dog chasing your character. Along with that, the player has to dodge all oncoming trains and obstacles. It gets significantly difficult when the game tempo increases.

First, the product was available on iOS and Android devices. However, the app was ported to Windows, Kindle, and other platforms due to its fantastic popularity.

Initially, the game starts with Jake, a default runner, but there are dozens more, as the player progresses. To unlock them, collect coins and unique hero features (e.g. hats, guitars, and many others). It’s also possible to buy in-game characters with real money.

How To Play Subway Surfers

The game starts when the player taps the touchscreen. After that, Jake (a default character) or any other runner is under your control. By swiping left, right, up, and down the player avoids crashing into obstacles.

To get as many scores as possible, pick up different power-ups (e.g. score multipliers, jetpacks, magnets, and others). They’ll significantly help your runner survive. On top of that, there is a hoverboard allowing your character to avoid collisions for 30 seconds.

This game is surely about practicing a lot, but some tips will help the player to score high:

These basic strategies are sure to be useful. Nonetheless, practice is the best and only way to achieve a high score in games like Subway Surfers.